Guru Suraj, a dance artist living in Chennai, India is visiting Toronto to present his film Contact Improvisation Lab Goa, co-created with Rahul Varma and Hari Choudhary, at the Contact Dance International Film Festival. Their film was selected by the festival jury as a Silver Award winner. Guru will be accepting the award for his team at the July 1 Gala screening at the iconic Revue Cinema on Roncesvalles Ave in Toronto.

Guru Suraj is a painter, dancer, theatre artist, Yoga trainer and more. He graduated from one of the most established Art Institutions in India – The Government College of Fine Arts (Chennai) and has a master’s in the philosophy of Yoga. He started practicing Contact Dance Improvisation 10 years ago and fell in love with the form. Guru has taught Contact Dance in Malaysia, Indonesia, Thailand, and UAE and is a teacher and team organizer at popular Goa Contact festival. He has been instrumental in building the contact dance scene in India through his group Contact Improv India Organization, which focuses on spreading Contact Improv around India and making it accessible for everybody. Guru explains, “I see dance as not only everyone’s birthright but one of the greatest tools of awakening one’s consciousness and awareness. Dancing can be a mirror to look deeply into our self.”

Contact dance improvisation is a social dance involving touch, in which momentum between two or more people is used to create and inspire dance movements. Similar to martial arts like Aikido, momentum is harnessed through weight sharing and rolling point of contact. Contact dancers use these techniques, not to defend themselves, but to dance. The form requires a deep awareness that allows dancers to respond in the moment to their partner. There are no pre-set roles and the role of leader and follower interchanges and blurs together. Contact dance is accessible to people with no previous dance training and to people with physical disabilities.

The Contact Dance International Film Festival celebrates films featuring momentum-based dance created by some of the top creators and dancers in the field of Contact dance improvisation. It provides an opportunity for both film and dance lovers to experience the joy, chaos, and intimacy of human connection through physical movement. The Festival runs every two years on the odd years and is presenting its fourth season in Toronto, June 29 to July 1, 2019.

The Contact Dance International Film Festival was founded by local Roncesvalles, Toronto area resident Kathleen Rea through her dance company REAson d’etre dance productions.  Kathleen, a former dancer with the National Ballet Company of Canada, switched ship from ballet to Contact Dance when she tried it for the first time twenty years ago. At that moment, she decided to dedicate the rest of her life towards supporting and promoting contact dance. Kathleen explains, “Contact dance is just about the furthest form of dance from ballet. They are both beautiful but really are on opposite ends of the spectrum. Ballet is about control and exacting technique, while contact dance is more like surfing a wave that you do not have control of. One does not have control the momentum of another decent but it takes a practiced level of awareness and skill to this harness kinetic force ”

Kathleen goes on to describe her philosophy in creating a contact dance film festival. She says, “Contact dance is really an all levels dance form in which experienced dancers get just as much joy from dancing with a beginner as with more advanced dancers. I really wanted the Contact Dance International Film festival to have the same feel. So, we program all level films! This means that films with high production values are screened right next to Instagram clips filmed on someone’s smartphone.”

The festival has always received submissions from around the world, but Kathleen noticed during the submission phase this year that there was an increased level of diversity. Since Toronto is such a diverse city, she was excited that the festival content was starting to come close to matching the level of diversity in the city in which it is occurring. Contact dance improvisation is not a codified dance form and as such every part of the world practices, it in a different way led by their community’s curiosities and interest. When different groups meet there is a chance for a rich and inspiring exchange of new ideas can that invigorate the community.

This increase in diversity of films submitted to the festival is partly due to the growing contact dance scene in India and the draw and history this community has to dance filmmaking. This season CDIFF is screening 4 films by Indian filmmakers. The popular Goa contact festival has in particular been the springboard for the creation of numerous contact dance films. A documentary on the Goa festival won an award in the 2015 festival. Two of the four Indian films this year were created in Goa and both have won festival awards. Guru’s filmmaking team has won the CDIFF silver award and Rohit Prem is a co-winner of the CDIFF emerging filmmaker award.

Possibly Bollywood culture plays into the fact that so many contact dance films are created by Indian filmmakers. Dance in Indian films has had a large cultural imprint both in India and on the world and Indian contact dancers may naturally gravitate towards creating films focused on dance because of this cultural history.

The Contact Dance International Film Festival invited Guru Suraj to come to Toronto to pick up the Silver Award on behalf of his filmmaking team and to network and share knowledge with the Toronto Contact Dance community. After a lengthy and involved visa application process, the Canadian Government initially claimed that they did not believe Guru would leave Canada after his visit and denied him a tourist visa.

Kathleen says, “as Canadian citizenship, international travel is a relatively easy thing for me. I was shocked at how involved the application was to apply for a tourist visa to Canada for many of the festival’s filmmakers from countries targeted with strick and involved travel visa policies. When two of our filmmakers received visa denials, I came to understand better how access to travel can affect a person’s career trajectory. The Canadian government’s belief that Guru would not leave Canada was unfounded. He is teaching in Germany later in the summer. He is a well-known and respected dancer who has made it his life work to bring contact dance to India. Why would he want to stay in Canada?” 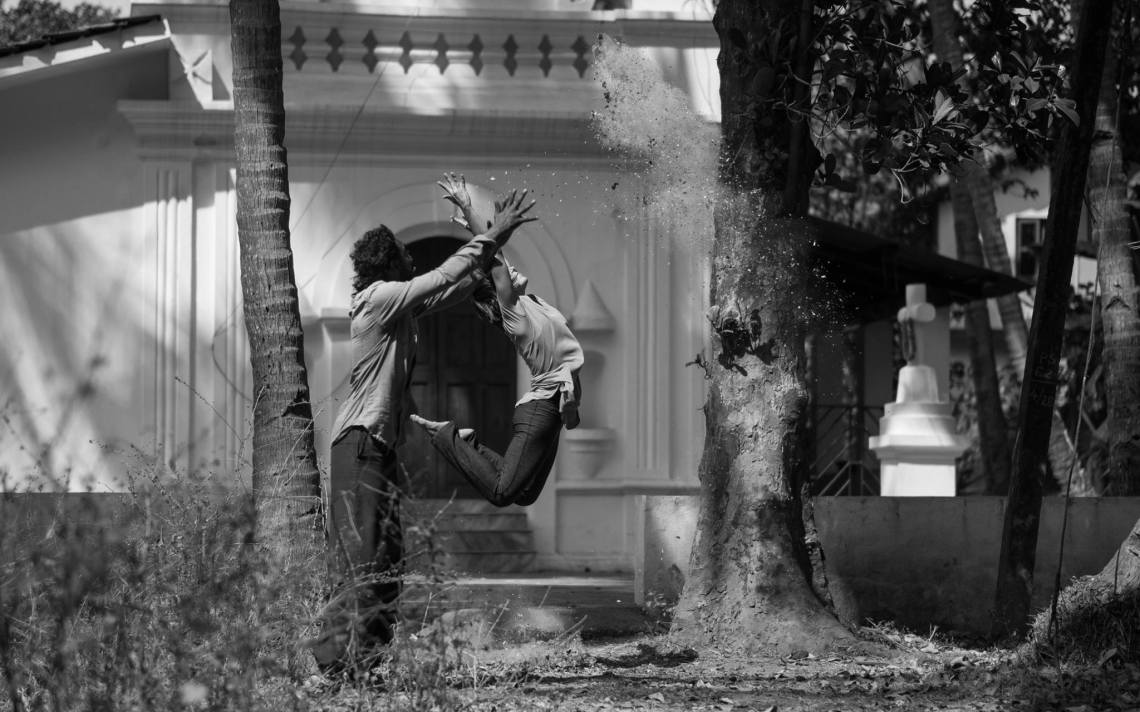 Both Kathleen and Guru did not want the rich cultural exchange to be swept aside by travel policies that target certain regions of the world. In one week, they raised enough funds to hire Bondy Immigration Law to reapply for Guru’s tourist visa. A petition was also started that garnered 1440 signatures. Federal MP Arif Virani got on board as well, writing a letter of support for Guru’s re-application. The Contact Dance International Film Festival was moved by the level of support from both the Toronto and the international contact dance community. The team effort paid off as Guru received his Canadian travel visa on his third application.

Guru says about this visa application process, “…What a start for a journey, journey before the journey itself. I have never been involved in such a fight or had to ask for so much support or have received so much love. And as I receive the visa… I feel a lot of gratitude for everything that happened. I’m grateful for the determination … of Kathleen Rea to try every way possible to make this happen. I remember her saying: “you are coming to pick up this award!” But also to make this case as loud as possible. It’s such an eye opener for people who were not aware of this regional discrimination and travel politics. This goes far beyond my personal opportunity to travel and teach. What I received will be shared with my co-artists here [in India]….. And this is also about carving the paths for Artists from all parts of the world to have equal opportunities to share their work. And about the strength of this nomadic CI community that truly backs up its members when needed.”

Kathleen says,  “I am late in the game in terms of realizing how much access to travel imbalances have shaped the international Contact dance improvisation community. The fact that many contact dancers have to go through months of rigorous visa applications and frequent denials creates an imbalance in terms of who can build their career through international travel. I wanted in some small way to repair this imbalance by supporting Guru in obtaining his travel visa, but it is not enough actually. What I would like to see is that a global discussion starts in the contact improvisation community around this issue that leads to practical solutions. Festivals could have a travel access fee added to registration to be used to support those having trouble getting visas. If those of us with travel privilege can pitch in to support those without the privilege then I hope things can become more balanced. Money raised could be used as well for education about the issue and on lobbying countries that have unfair travel policies targeting certain regions. As a Canadian, I am ashamed to say that Canada is one of those countries.”

Come out and meet and learn from Guru Suraj at the Contact Dance International Film Festival occurring June 29 to July 1, 2019, in Toronto.

Kathleen Rea danced with Ballet Jörgen Canada, National Ballet of Canada and Tiroler Landestheater (Austria). In 2000 she formed REAson d'etre dance productions, a dance company that promotes contact dance improvisation. Kathleen Rea has emerged as a choreographic presence. Her work is "fabulously original" [Sheena Wilson, www.danceinsider.com] . Kathleen's individuality of expression stems from her varied background, which includes ballet, modern, contact improvisation, and dance theatre and is influenced by the multi-disciplinary art techniques involved in Expressive Arts. Kathleen has choreographed over 40 original works for various organizations including REAson d'etre dance productions, Bravo Television Network, Ballet Jörgen Canada, Canadian Olympic Association, Decadence Films, Dusk Dances, Gender Play, George Brown Dance , Good Hair Day Productions, princess productions, Prologue for the Performing Arts , Ryerson University Dance Program, Studio 303 and Toronto Dance Theatre . In 2009 Kathleen's modern ballet Long Live was nominated for three Dora Mavor Moore awards including outstanding choreography. In 2010 Kathleen won the K.M Hunter Dance Award. Kathleen is long standing a member of the contact dance community, founding the Wednesday Dance Jam. The Wednesday Dance jam provides a dance class followed by a contact jam with live music and has run weekly for 12 years. Kathleen Rea has a Master's degree in the Expressive Arts Therapy with minor in Psychology from the European Graduate School and ISIS-Canada. Along with a private practice Kathleen does therapeutic performance facilitation in which she helps groups express their life stories through dance and theatre performance. Kathleen has taught at George Brown College, York University and Niagara College in subjects including contact dance, dance improvisation and dance therapy. Her book The Healing Dance: The Life and Practice of an Expressive Arts Therapist", published by Charles C. Thomas Publishers is available on Amazon . "Beauty and authenticity were my immediate impressions...The Healing Dance reads like a novel yet delivers a professional and academic body of work that will be sure to please..." The Arts in Psychotherapy 40 (2013) 358–359 View all posts by kathleenrea

The Healing Dance by Kathleen Rea